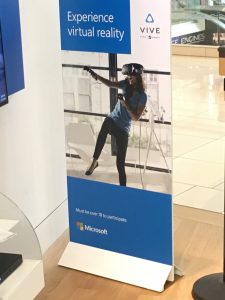 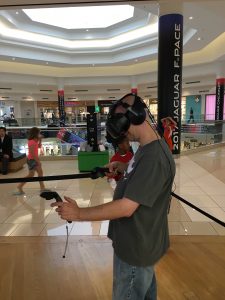 Anyone who knows my husband knows that he is into virtual reality.  His goal is to write music programs where people can experience music in VR.  Several companies are going to be releasing vr machines this year.  So, he is super stoked about that.  A couple of weeks ago we drove up to Cincinnati to the Microsoft store that had a free demonstration/trial of these machines.

The VR machine consists of a large headset – a mask-like device that straps around your head and fits over your eyes, some large headphones and two controllers – one for each hand.  There are also two black boxes that are mounted to the ceiling that are used to track your movements.  Once you are “suited up” you can then enter the world of virtual reality.  I also did the free trial, and I will admit that was pretty cool!

It puts you right in the middle of the game or activity that you are doing.  The first demo looked like you were on a ship in the bottom of the ocean.  You could walk around and explore all around the ship.  You could lean over the boat rail and see the sandy ocean floor.  There was a shark swimming around that looked like you could reach out and touch it!  Another demo was an art program.  You had the ability to paint all around you using your controllers and you were right in the middle of your masterpiece!  It was a lot cooler than I can describe, so you will just have to take my word for it – until Andy gets his machine and you can come over and play with ours.  😉

At one point, Andy was doing the art demo.  He was walking around and painting.  He was less than two feet away from me standing face to face.  I could have reached out and touched him.  However, He was completely unaware.  I snapped the picture below.  It looks like he is posing, but he had no clue I was right there in front of him! 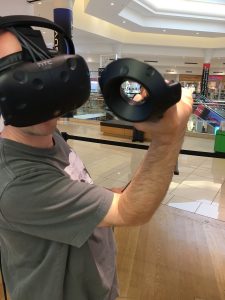 This was the most awkward feeling for me. I felt invisible.  It was such a lonely feeling.  I began to think about how often we do this in real life.  How often have we looked right past the people who are right in front of us?  One might think we only do this only in crowds, but the sad thing is we often do it to those who are sitting right in front of us.  How many times do we look over someone’s shoulder or get distracted by other things? It may not seem like a big deal, but it can send subtle messages to others that there is something else more important than them, that they are insignificant.

Paul E. Miller writes about how Jesus had a one-person focus.  “When Jesus interacts with people he narrows his focus down to one person….When Jesus is with someone, that person is the only person in the room.  Jesus slows down and concentrates on one person at a time…..This one-person focus is how love works.  Love incarnates by slowing down and focusing on just the beloved. We don’t love in general; we love one person at a time.” (A Praying Life)

Who do we need to slow down and concentrate on?  Who needs our complete attention?