I was going to write about something else today, but I changed my mind.  That’s one of the great things about writing a blog.  You can write about whatever you want.

I am going to share something that I haven’t shared with many people.  For a long time, I blamed myself for my first husband’s death.  He got up before I did the morning that he died.  I was still sleepy, so I rolled back over and started to drift off.  I was in that state of half sleep and half awake.  You know the one where you are still aware of what is going on, but everything is a haze and its feels like there is a 50 pound concrete block on top of you making movement difficult.  I remember distinctly hearing a thump.  I figured my husband had dropped something and that he would call for me if he needed help.  When I woke up a little while later, I was greeted with an awkward feeling – I felt like I was alone.  But, how could that be?  I called for my husband, “James?”  Silence.  Had he gone out?  Surely he would not have went out without me.  He couldn’t drive and it was a cold December morning, so where would he have gone?  At that point, panic hit me.  My heart started racing and I was nauseous.  I called his name louder as I went into the computer room where I usually found him, but not this time.  As I rushed out of the room, I noticed him face down on the floor.  His body was heavy and lifeless.  After the paramedics arrived and assessed the situation, one of them said, “It’s too late.  there’s nothing we can do.”  I remember thinking that morning and for a long time after, if only I had gotten up to check on things when I heard that noise, maybe I could have saved him – maybe it wouldn’t have been too late.

It took me a long time and lots of therapy before I could get to the point to where I didn’t feel like his death was my fault.  I realized today though that just because I had dealt with this and it happened over 8 years ago, that I am still affected by this trauma.  My life is still rattled by this experience, just like earth is by aftershocks of an earthquake.  Wikipedia says this about aftershocks: “Aftershocks are dangerous because they are usually unpredictable, can be of a large magnitude, and can collapse buildings that are damaged from the main shock. Bigger earthquakes have more and larger aftershocks and the sequences can last for years or even longer especially when a large event occurs in a seismically quiet area.” 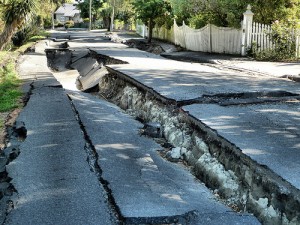 Just this morning I was made aware of an aftershock.  My husband started coughing while eating his breakfast, and I immediately asked if he was okay.  He shook his head and started laughing.  When I asked why he was laughing, he said because I am always asking him if he is okay-even when the littlest of things happens.  As I thought about his comment, I realized that he is correct.  I do ask him that frequently. I concluded that this action is a direct result of my first husband’s death.  I don’t want the same thing to happen to him.  It is an aftershock.

“Aftershocks can collapse building that are damaged from the main shock.”  I think this is the main concern.  If I continue to let my thoughts and actions be consumed by fear of something happening, then it is going to damage me and quite possibly my current relationship.  It is going to be easy for me to fall back into thinking that what happened to James was my fault.  I will become obsessed with ensuring that my husband now is okay.  When in reality, I am not in control of what happens to him at all.   Only God knows and controls the future.  I need to trust Him with it.

So, how do we deal with these aftershocks?  The Red Cross advises to do the following after an earthquake:  “Each time you feel an aftershock, drop, cover and hold on.”  Just like a physical earthquake, we may not be able to stop the aftershocks of traumatic events.  But when we see them coming or find ourselves in the midst of them, its best to drop, cover and hold on.  Drop to your knees and pray.  Ask God to cover you.  Psalm 91:4 says, “He will cover you with his feathers, and under his wings you will find refuge; his faithfulness will be your shield and rampart.”  And finally, hold on.  Grasp on to the truth.  Cling tight to his promises.  One of our elders was praying for me at church about this awhile back and she said sometimes you need to say these things out loud. There is power when you give it a voice – proclaim it.  It may be scary the first few times, but over time it will get easier as you realize that these aftershocks don’t have to consume you.