Even if He Does Not

In the midst of struggles it can be difficult to remain faithful. Our lives can be filled with wonderful things, but our vision becomes clouded keeping us from seeing and enjoying those things in hard times.  I am currently stuck in that place right now.  I have let my heart and mind get so focused on those things not going the way I want that I have allowed it to block my joy.  I have been wrestling with God about this.  In my spirit on Sunday morning, the question that kept being asked was: “but even if he doesn’t?”

What if God doesn’t give me what I want?  Why am I putting that situation before God’s plans or desires? Am I hinging what I believe about God on how he settles that one thing?  Its easy to say we trust God.  Its harder to say I trust God even if he doesn’t do what I want him to do.

“But even if he does not” was the response that Shadrach, Meshach and Abednego gave to King Nebuchadnezzar in Daniel 3.  I went back and read about that as I tried to answer that question for myself. The king had built an image of gold that everyone was expected to bow down to and worship.  He had also built a fiery furnace and anyone that refused to bow down to the golden image would be put to death in the fire.  Shadrach, Meshach and Abednego were jews who worked for the king.  They worshiped God and were to worship no other, and so they refused to bow down to the image the King had created. King Nebuchadnezzar said to them, “if you do not worship it, you will be thrown immediately into a blazing furnace. Then what god will be able to rescue you from my hand?”  (Daniel 3:15, NIV)  They responded by saying: “If we are thrown into the blazing furnace, the God we serve is able to deliver us from it, and he will deliver us from Your Majesty’s hand. But even if he does not, we want you to know, Your Majesty, that we will not serve your gods or worship the image of gold you have set up.”  (Daniel 3:17-18, NIV)

Shadrach, Meshach and Abednego were not willing to put anything above God….they were even willing to give their own lives in the fiery furnace.  What are we putting above God?   We may not be tempted to bow down to a golden statue.  But, often we are willing to bow down to other things – things that we want and desire that have been placed before us – things like money, status, possessions and relationships. These things in and of themselves are not bad.  But, when we put our pursuit of those things above God, then there is a problem.  When it comes to pursuing those things, can we say but even if he does not?

Are we willing to trust God and face the fire?

I just finished the book Bird by Bird: Some Instructions on Writing and Life by Anne Lamott.  I read the book for the instructions on writing part, but I fell in love with the insights on life that are woven throughout the book.  I would recommend it to my writer and non-writer friends alike.  One thing that she wrote really struck a chord with me.  She writes:  “Toni Morrison said, ‘The function of freedom is to free someone else,’ and if you are no longer wracked or in bondage to a person or a way of life, tell your story.  Risk freeing someone else.”

When I read that phrase, I had to put the book away for awhile and process.  Shouldn’t that be one of our main goals as people who love Jesus?  He freed us from slavery to sin.  He liberated us from a life of defeat and despair.  He led us to escape the grip of fear.  Shouldn’t the natural response to our freedom then be to lead others to that same freedom?  Or, have we become so used to our freedom–or so far removed from our bondage that we forget what it feels like?  I think we often forget how much power there is in freedom.

How do we help lead others to freedom?  One of the simplest ways is exactly what Lamott points out, tell our story.  When we tell our stories, we gain power over them, no longer imprisoned by hurt and shame.  I have a friend who has had opportunities to share her story at a women’s retreat and churches.  It is a beautiful story that she tells not only through her own experience, but also though the story of Gomer  in the Old Testament.  She shares how Hosea continued to love and pursue Gomer when she kept running from him just like God kept pursuing her when she was running.  Her honesty and transparency is creating a path for others to the God that is pursuing them too.  If we are free, then we should be blazing the trail for others with our war paint on and our weapons raised screaming “freedom!”  We do that by telling our stories to anyone who will listen -to anyone that we know who who is still bound. 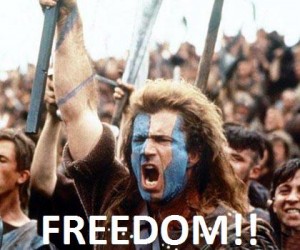 Instead, we lock away our stories and experiences like a teenage girl holding her diary tightly against her chest – protecting her secrets from being revealed. Only by releasing our grip can we experience true freedom. Galatians 5:1 says:  “It is for freedom that Christ has set us free. Stand firm, then, and do not let yourselves be burdened again by a yoke of slavery.”  When we continue to hold on to our pain, hurt and shame in fear of what people may think, we are putting on that yoke again. And as long as we continue to hide our stories away, we aren’t leading those we know to the one that can permanently remove that yoke for them.